We are working to remove parasites without damage to the host. In salmon aquaculture, the host is the salmon, and the parasite is the sea lice. Our analysis has identified wavelengths that can target the parasite.

Working closely with researchers in the National Centre for Laser Applications (NCLA) – based in NUIG we have developed ground-breaking technology with the potential to significantly improve on the current means of dealing with parasites.

The aquaculture of salmonids is the farming and harvesting of salmonids under controlled conditions for both commercial and recreational purposes. Salmonids (particularly salmon and rainbow trout), along with carp, and tilapia are the three most important fish species in aquaculture. The most commonly commercially farmed salmonid is the Atlantic salmon. 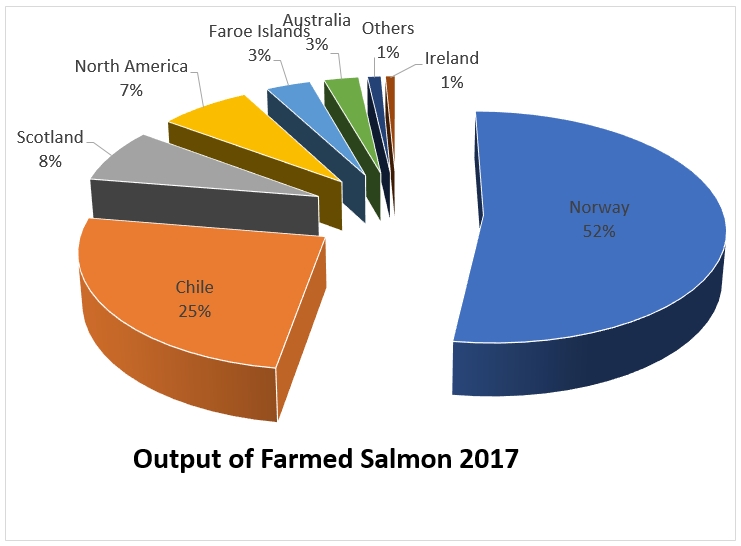 Unfortunately, sea lice Lepoephtheirus salmonis and salmon farming appear to go hand in hand.  The lice are tiny crustaceans that have infested salmon farms globally. Fish famers now consider sea lice the biggest threat to their industry and say the persistent problem is making the fish more expensive to consumers.

The lice are attracted by the sunlight and rise up during the day - only to descend again at night. The salmon on the other hand go down to the cooler waters during the day and tend towards the surface during the night.  In any case, once they meet the sea lice attaches itself to a fish.  The lice feed on the blood and mucus of the fish, growing rapidly and weakening the fish. Sea lice have been shown to reduce fish growth and appetite, leave the fish prone to diseases and cause substantial costs to salmon farmers worldwide.  It damages the brand of salmon farming. It damages the fish which ultimately costs the whole industry.

Fish farmers identified the lice as a problem around 1994. Feeding fish a pesticide with the active ingredient of emamectin benzoate became the tool of choice to control lice. But around 2009, the lice appeared to become resistant to the pesticide, and they have spread globally since. The only way to overcome this resistance was to increase the strength of the chemicals which is not good for the fish or the environment.

The global aquaculture industry loses about US$1billion a year to outbreaks of sea lice in salmon farms around the world - and sea lice cost the Norwegian salmon industry alone almost a half a billion dollars in 2011.

Experts feel the only hope is to develop new methods to control the spread of lice, which are present in the wild, but thrive in the tightly packed ocean pens for fish farming.

Sea lice are a naturally occurring parasite found on salmon. Lepeoptheirus Salmonis is a parasite with a direct lifecycle, with 8 stages comprising of nauplius 1 and 2, copepodid, chalimus 1 and 2, preadult 1 and 2 and the adult stages. The lifecycle can take 9 weeks in seawater of 6 degrees temperature, but this can shorten to 4 weeks in seawater of 18 degrees temperature.

The nauplius 1 stage hatches from paired egg-strings and is dispersed in the plankton. It moults to nauplius 2, also planktonic, which is followed by a copepodid, the infective stage where attachment to the host (salmon) takes place. The copepodid then moults through the attached chalimus stages before becoming a mobile pre-adult. At this stage, the lice can move around on the salmon. It is beneficial to treat the lice at any stage, but all efforts should be made to stop them by the pre-adult stage, otherwise it might be too late to save the fish. 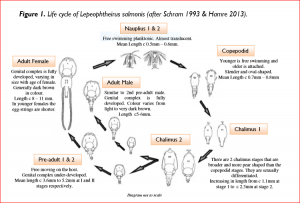 The adult female produces batches of paired egg-strings, which in turn hatch into the water column to give rise to the next generation. The mean length for an adult female is 8mm-11mm, and an adult male is 5-6mm. The egg strings can hold up to 1,000 eggs, and a single female may survive for up to 7 months producing 6-11 broods. Female fecundity and development times of all stages depend on water temperature. After hatching, lice disperse into the water column as planktonic non-feeding larvae and survive on their own energy reserves for 5-15 days before attaching to their host. Lice make their initial host attachment using a prehensile antennae and maxilliped followed by a more durable connection via a frontal filament.

Parasitic sea lice are considered “epidermal browsers” that use a rasping apparatus, sometimes called a “mouth tube” to graze and feed on host mucus, skin and underlying tissue. Primary host responses include reduced appetite and growth. The external wounds, increased stress, and reduced vitality due to lice infection are also likely to increase host susceptibility to secondary infections of viral or bacterial diseases.

The infective larvae are less than a millimetre long so in the wild finding a host is a difficult part of the life cycle, but in aquaculture, fish are kept at unnaturally high densities, so the parasites will exploit that, and their lives become easy.

Although they are small, the lice can cause catastrophic damage commercially. In warm waters, the infestation can multiply quickly and can wipe out the fish farm. Infected fish are more difficult to sell due to the lesions the parasites cause. Regardless of the appearance, the health of the fish is also at risk. In extreme cases, an infestation can cause mass mortality. At best, it can weaken the fish, so that they struggle to survive some of the treatments. In many cases the farmer needs to harvest the fish early - instead of letting it grow out fully.

Photonics is the science of light. It brings together several disciplines and is at the crossroads of physics, chemistry, electronics and mathematics.

Photonics can be viewed as analogous to electronics. The flow of electricity in a wire consists of the combined movement of fundamental particles of charge, called electrons. The devices and systems used to generate and manipulate electrical signals are grouped under the banner of electronics. Experimental and theoretical work carried out by many leading physicists, including Albert Einstein, at the beginning of the 20th century, changed the way we understand the nature of light. It was shown that light consists of a fundamental particle, called a photon, which can be treated as a packet of light. Therefore in analogy to electronics, the flow of these photons in a beam of light or through a material gave rise to the term photonics.

The omnipresence of electronics in modern life is clear for all to see in the products we take for granted such as the computer you’re now using. In comparison the impact of photonics is perhaps less visible and not just because many of the advances involve wavelengths (or colours) of light that are invisible to the human eye. The colours that we see only form a small part of the broad spectrum of light that exists. Ultraviolet (UV) light, which has wavelengths shorter than the violet which our eyes can see, is probably most associated with sunlight and its effect on our skin. Despite being invisible to us, UV light has a great many useful applications in diverse fields such as curing of adhesives, security tagging and biological imaging. Infra-red (IR) light has wavelengths longer than the red we can see with our eyes and we commonly associate it with the generation of heat given that we all radiate IR light from our bodies. As a result one of the most widely known applications of IR is thermal imaging but IR technology is used in fields such as spectroscopy, telecommunications, electronics and astronomy.

Photonics is a key enabling technology of the 21st century. At the later part of the 20th century the continued development of the semiconductor laser enabled long haul fibre-optic communication to become a reality. As well as revolutionising telecommunications these advances also enabled the development of the internet. While the internet could not have evolved without photonics, the use of light has become a seamless part of our everyday lives beyond communications. There are obvious photonic applications, such as checkout barcode scanners, remote controls, car lights and DVD players, with which we interact with on a daily basis. Moreover many of the products we use, from pharmaceutical drugs to mobile phones, are manufactured, inspected and tracked using photonic technologies. APS has vast experience using photonics and is always on the lookout for new applications.